As the battle against COVID-19 continues, we must remember that this war does not extract an equal toll on everyone. Racial and socioeconomic discrepancies put marginalized and minority communities at greater risk of contracting coronavirus. Health disparities are not the result of any one single contributor, but rather the consequence of a multitude of environmental and public policy factors; health disparities are merely reflections of existing disparities in our society.

Let’s take a look at the facts:

The California Department of Public Health reported coronavirus data by age group, last updated on July 26, 2020, at the time I write this article. In every age group and the overall chart, Latinx people have the largest death toll, and consistently the Latinx mortality rates as a fraction of overall mortality is larger than the percentage of the American population that the Latinx community makes up. 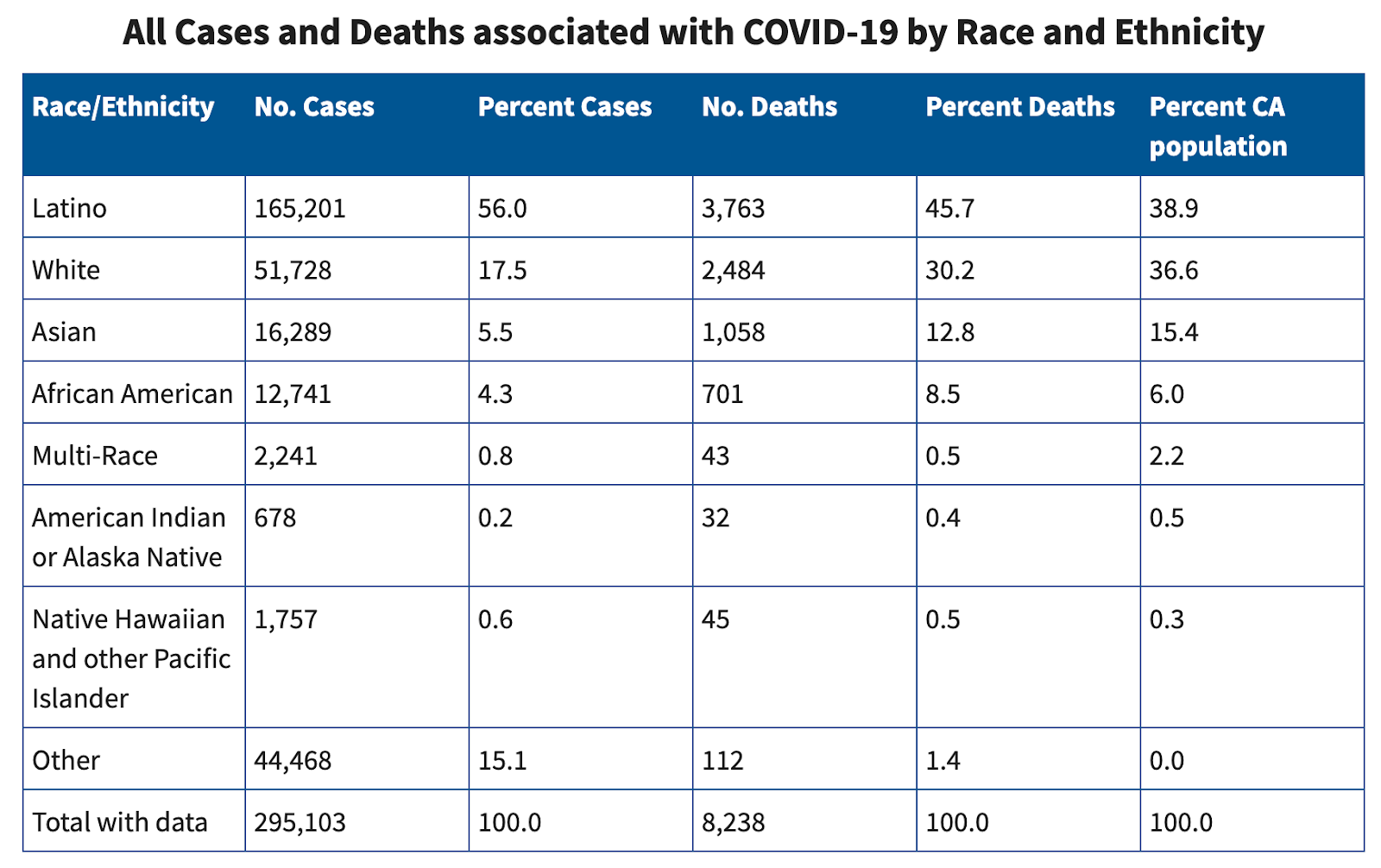 Now let’s take a step back and look at the United States as a whole, not adjusted by age group. 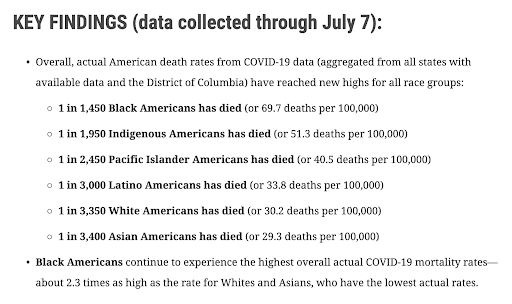 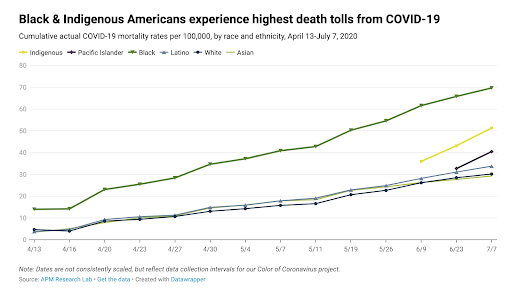 Let’s compare mortality rates and population percentages for the black and white communities. According to Statistical Atlas, whites make up 62% of the United States population, and African Americans account for 12.6% of Americans. If you take a look at the line graph, in mid-April African-American mortality accounted for roughly 15%, just slightly above the percentage they contribute to in the population. Relatively proportional. By July 7th, that percentage rose to almost 70%. Contrastingly, white mortality started at around 5% and climbed to 30% over the course of the three months shown. The discrepancies in mortality rates and population percentages alone is concerning. 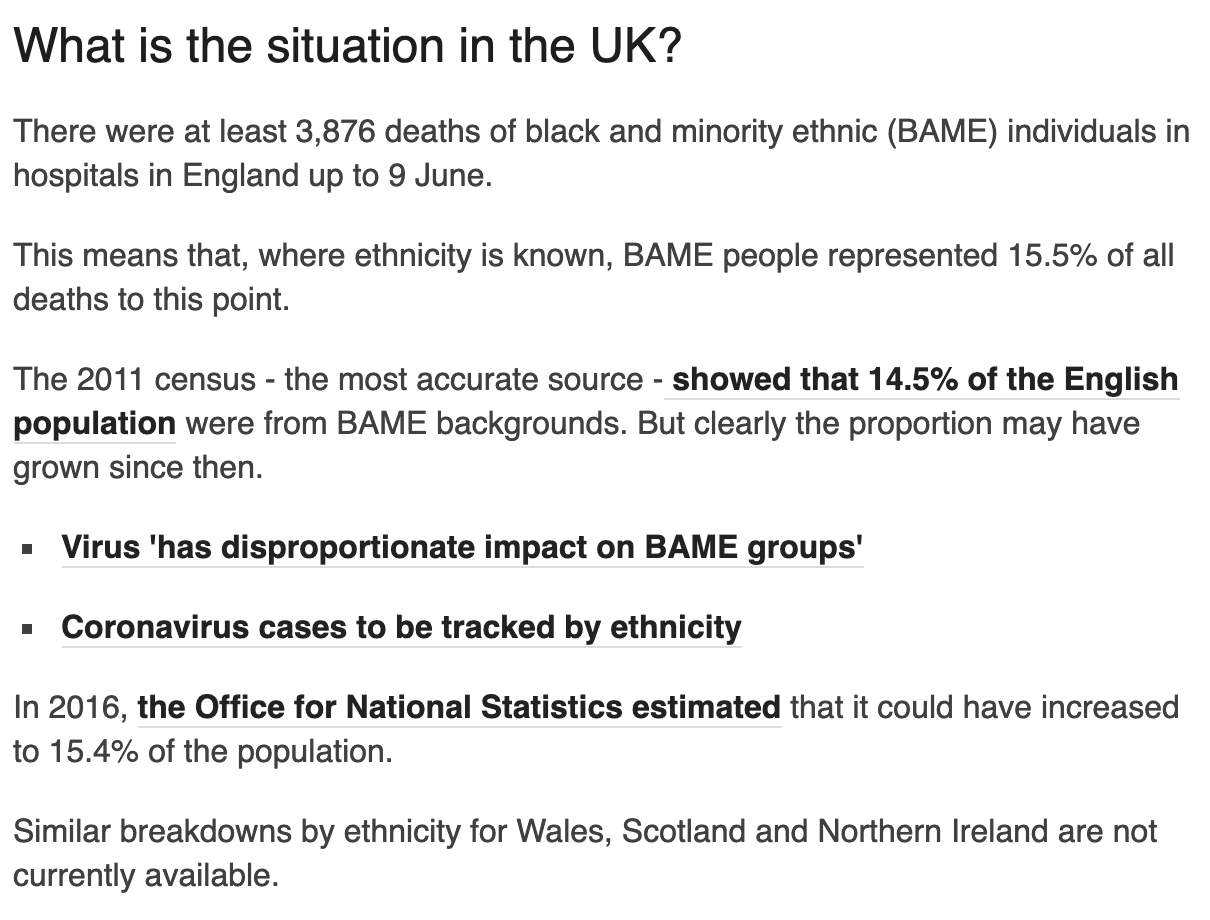 Needless to say, the numbers in the U.K. are far closer in proportion than those in the United States, but the difference exists nonetheless.

Why are these discrepancies persisting?

The CDC has an entire section on racial discrepancies in regards to the coronavirus and specific reasons listed as to why. The overlying reason was because African American and Latinx people make up a large amount of the population of low-income or socioeconomically disadvantaged neighborhoods and are more likely to perform essential jobs. Consequent work, healthcare, and living circumstances will thus increase their risk.

For example, since ethnic minorities are more likely to be essential workers, they will come into contact with more people per day, which increases exposure and ergo, risk of infection. Outside of essential work, “on average, racial and ethnic minorities earn less than non-Hispanic whites, have less accumulated wealth, have lower levels of educational attainment, and have higher rates of joblessness,” explaining why they compose such a large portion of the impoverished population (CDC). Many lower paying and essential jobs have a lack of paid sick leave as well, which means employees are more likely to work while already sick, making them even more vulnerable to infection.

Additionally, cheaper insurance usually covers less of the cost of care and/or allows fewer facilities to provide the necessary supplies and care to those in need. “Compared to non-Hispanic whites, blacks experience higher rates of chronic conditions at earlier ages and higher death rates. Similarly, American Indian and Alaska Native adults are more likely to have obesity, have high blood pressure, and smoke cigarettes than non-Hispanic white adults. These underlying medical conditions may put people at increased risk for severe illness” (CDC). These chronic and underlying conditions already put the communities at risk from the virus as a whole, but also are expensive to treat, especially without adequate healthcare coverage.

Insurance factors feed directly off of work conditions due to cost and employee benefits, or the potential lack thereof, but that’s not the only issue. Language barriers, system distrust, and affordability can also hinder the ability of minorities to receive care.

The third major reason minorities are at higher risk for COVID-19 is common living conditions. Low-income communities are usually further from grocery stores, pharmacies, and medical facilities and have poorer plumbing and thus lower water hygiene. It is much more difficult to social distance in these communities as well, due to a higher reliance on public transportation and high rates of overcrowding and multigenerational homes with already at risk family members due to age. Additionally, “some racial and ethnic minority groups are overrepresented in jails, prisons, homeless shelters, and detention centers, where people live, work, eat, study, and recreate within congregate environments, which can make it difficult to slow the spread of COVID-19” (CDC).

Adding no respite from the apartheid of disease comes the factor of environmental racism. Similarly to living conditions, environmental racism places disadvantaged communities of color far closer to dangerous areas such as hazardous waste plants, oil pipelines, and factories than their upper class and often Caucasian counterparts (Vice). These areas rife with pollutants expose members of the lower-income communities to carcinogens as well as unclean water and toxic air conditions. This tends to be due to less strict adherence to environmental protection and public health laws, and results in higher concentrations of dangerous conditions and deadly diseases in minority communities.

As we know, those who are immunocompromised and/or have pre-existing conditions are more at risk of contracting COVID-19 than their able-bodied peers. Due to erosion of baseline health in these communities, pre-existing conditions, immunocompromisation, and at the very least other sicknesses that can weaken the immune system are much more common, thus making them even more susceptible to the virus.

Clearly, this isn’t just a racial issue but an economic issue as well. However, much of the economic discrepancy causing risk here is due to systematic racism in environment, residence, workforce, and healthcare, considering all the aforementioned factors impact ethnic minorities drastically more. Ergo, economic, environmental, and racial injustice are all inextricably interlinked and interdependent.

Systematic racism runs rampant in the United States, and as the world draws attention to its infection of the justice system, we must not forget its omnipresence elsewhere, specifically in healthcare, and especially as we battle COVID-19.

The globe is fighting two deadly pandemics-- coronavirus and racism-- and they are allies. Please continue to support disadvantaged communities and healthcare workers on the front lines whenever possible and take the time to educate your peers of the existence and importance of racial equity and safety to the best of your ability.